Its been a few weeks since I have done a kiddo update...so here we go....update on Hanna family munchkins and their shenanigans....

Piper Kate is back from Michigan and doing great.  She started 4th grade, which seems to be alot like 3rd grade (same teacher even....perks of a super small school) only with more 'tude.  She was in the Junior Rodeo this weekend and did a great job!!   Being that she didnt get any riding time in this summer and only 4 days worth before the rodeo, Im ridiculously proud of her!!!

I got it!!  I got my revenge on my Disasterous attempt at 8 miles last week.

I know, you are not aware of it because I did not blog about it....that, with the capital D should tell you just how un-fabulous it was.

Anyway, I moped about it for a few hours but thankfully was distracted by the fact that we went to the airport that night to pick up Stinkerbell after 3 months in Michigan with her dad.  Totally softened the blow. 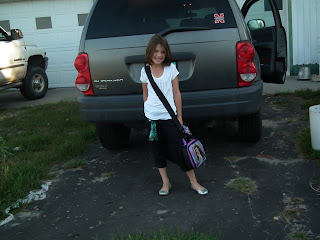 I had some good runs this week, felt stronger but maxed at 4 miles so I didnt really expect much of a challenge from them.

I have a pinched nerve in my back, which is causing my left leg to be numb and yesterday was the Junior Rodeo which Stinkerbell was riding in, and I had 3 miles on the schedule...but with everyone going on, I took another day off.  I know I can do 3 and I can do it in good time so I wasnt to concerned.

My schedule had 6 on it today and they felt good....so when I got the the end of my driveway, I turned around and went back out a mile...knowing that once I was gone, I had to run back and I would have my sweet revenge on the 8 miles.

Maybe this 1/2 isnt impossible after all :-)

Ok, let me explain Mile 4 a bit.....I had to stop and tie my shoe plus yell at my dog (that is such a common theme sometimes).  My average pace was 9:24 so I was super thrilled at that I still managed to hit my tempo pace for the average.

I ordered a compression sleeve for my ankle, Im hoping that it will help support some of the aching.  I have put my calf sleeves back on and I can tell a difference already.  I dont have any pain in my ankle (yet) and I think its just aching from pushing it more during the long runs so Im hoping I can ward off any disasters by being a little cautious.
Posted by Mom_2_Pippa at 10:01 AM 1 comment:

So I have been absent lately but its been a busy week!  Ill do a quick recap and Im thinking thats all the boys will give me time for.

Sunday morning I did get up and run my longest distance yet....7 miles.  I did it in 1:13:24 with a pace of 10:29.  I was shooting for 10:30 as my pace so Im very happy with that.  This week is a relatively easy week of 3 miles, two 4 mile runs and then the not so easy day of 8 miles.  However the night after the 8 mile we are driving to Denver to go pick Piper Kate up from the airport so Im sure I will FLY through that run!!

The county fair was this past week also so we were crazy busy with that.  I cant imagine how busy we will be when the kids are all participating in 4H activities and I have a horse ready for the fun day.  I was exhausted with 2 rodeos, a 5K and just going back and forth for 3 days.  Im glad I stuck with my schedule though and got my running in......Im really trying hard to stay focused for the 1/2 and not let anything interrupt my training.  Lets hope it keeps going smoothly when school starts in a week.

Well I got 'er done in more ways then one.

I got my planned 6 miles in, which I was dreading and I didnt do to bad either.  OK, so yes, I thought I might pass out and I seriously considered laying down and waiting for someone to drive by, pick me up and roll me out of the car on the way past my house.  However, then I remembered it was Sunday and that the people who typically drive by the morning are early 20 something guys....I didnt think that was the best plan I had ever come up with.  So I sucked it up, cursed myself and my brilliant 1/2 marathon idea and finished the stupid run.

Yes, I whined the whole way however true to form, once I got done and looked at my watch and realized that I had just run farther then I had ever run before and that my time wasnt terrible (59:41 for 9:56 average mile, Ill take it!).  Of course I will do it again, Im not giving up on the 1/2...Im way to stubborn for that but I will probably have to convince myself of why it was a good idea over and over and over again.  And again.

Not that finishing the 6 miles wasnt enough of a motivation for me BUUUT when I weighed myself and found that I had HIT.MY.GOAL.WEIGHT I was soooo happy!

All that running paid off 10 months after I started.  I am down 65lbs and where I was when I got married in November 2008.  I may weigh the same but Im in better shape, which is a great feeling!  My husband even said that I look better then I did when we got married, which is a really good feeling as he is NOT an overly mushy, romantic kinda guy.  And he told me that withot being prompted, which means he really means it.  Not like when I came into the house, collapsed on the floor, threw my garmin at him and said "you better tell me how fantastic that run time is or I will hurt you".

I was never much of a goal setter when I was younger.  I wish now I had been.  Setting goals and reaching them with all the set backs and ups and downs is such a great feeling.  Its something I am going to teach my kids because I want them to be proud of what they can do.  With running, its all me.  No one else is kicking my butt out the door, setting my alarm clock or pushing me up those hills.  Its me.  I can give credit to the people who support me, my running buddies, my family and friends who say "good job" or "way to go" but in the end....I run my race.  By myself.  Accomplishing my goals without any assistance, which for me, makes it that much sweeter.
Posted by Mom_2_Pippa at 9:45 AM 1 comment:

All Aboard the Crazy Train

Thats my new motto....we used to be a traveling circus, but that doesnt exactly cover it anymore.  Not with 2 mobile toddlers and 9 year old tween and training for a 1/2 marathon.  Did I mention hubby's in preseason mode for hunting....starts in 5 weeks...gotta get the trail cams out and start scouting and sight in the bow, get new stuff for the bow....attempt to get a new bow (shot that one down real fast)...now.  Oh yea and back to school stuff, haying, cows...all that stuff.

I just got Piper's ticket to fly home on August 21!!  I have missed her so much, 3 months is a long time to away from her momma.  Oh, she is having a great summer and I love that she spends that much time with her dad, stepmom and their family because I honestly feel that she can enjoy it so much more then everyother weekend.  Coming and going is hard on kids, and while I miss her TONS, I think she handles the whole thing better knowing she doesnt have to pack up in a few days and go back home.  That little sentimental moment passed, she seems to have picked up a powerful dose of 9 year old 'tude....that should be fun.  Y.I.P.P.E.E.

The freaking cows are all TB negative...YES!!!!!  I wont get into details but lets just say it was a long, frightening, confusing 3 weeks with alot of questions and very little answers.  Well, thats not quite true, there were alot of answers.  The problem is when you deal with state vets and federal vets, the answers are not the same.  Thank you to EVERYONE who helped during the whole thing....the people who knew and didnt ask questions cause it wasnt something that was being broadcasted, the cowboys and their horses who worked their asses off in the heat to gather the very uncooperative cattle, twice.  The people who silently lent their support and openly did the same once we got the all clear.  It could have been bad.  Could have but its not.  Everyonce in awhile even a blind squirrel finds a nut :-)

The boys have been up to their usual shenanigans....well, Fasty McNasty has been up to his usual and Buster McThunder is getting started.  Example:

Shawn heard the boys making noise when they should have been napping so he went to investigate and found them standing in their cribs, looking out the window.  One had a diaper on, one did not.  So he immediately remedied the situation and gave up on nap time (so mommy could deal with it later) and let them play.  I went to retrieve the sippy cups out of their beds and found all of Sage's stuff...pillow pet, sippy up, blanket had been relocated into Bran's crib.  Not unusual, except for the diaper I found UNDER all those items.  Which means that 1) his diaper didnt "fall off" and 2) he threw it at his brother and 3) he threw it first so we were darn lucky there wasnt a "present" in his crib when daddy found them.  Cause it wouldnt have been a present for daddy, Im sure.....

I havent gotten into my long runs for the 1/2 yet, my first is this weekend and its 6 miles.  So not terrible, however the longest I have gone yet.  Im not worried about getting it done, Im worried about the fact that the 1/2 is in less then 2 months and I just now running my longest distance of 6 miles.  I guess this is the point in time when I think "are you out of your ever-loving mind?" and the answer is yes, I usually am.

I blame my kids.  And the cows...when all else fails, always blame the cows.

I know I will finish the 1/2.  In good time, well that remains to be seen but I will finish.  I kinda wish it was a bigger race.....something cool like the Rock N' Roll 1/2 in Vegas (which happens to be during the NFR finals...just sayin') or Tinkerbell 1/2 in Disney (I bet I could rock a pair of wings.....) but Im also glad its a smaller run, in a small town with a relatively small group of people so if my first 13.1 mile race is an epic FAILURE, it wont be witnessed by thousands of people.  Just a few hundred.
Posted by Mom_2_Pippa at 11:22 AM 2 comments: