DONE!
Tuesday, Thursday, Saturday and Sunday, which worked out great since I made the decision to register and start training for a 1/2 on Wednesday and I had done the appropriate distance on Tuesday already.  So technically, I started before I knew what I was doing.
This week was three 3 mile runs and 5 miles for my long run on Sunday.  They all went really well, even today which was a challenge to say the least.
I found out yesterday that I was needed to help move some cows around today, horseback.  I knew I was going to have conflicts with my training coming up but I didnt think it would happen a week in!  Anyway, set my alarm for 5am, so I could leave the house at 530, get my running in and be done by 630.  It was a great plan till 330am when Thing 2 woke up, which was quickly followed by Thing 1 not long after.  So I moved the initial offender into our bedroom hoping the idea that mommy and daddy were both SLEEPING would make him sleepy.
No. Such. Luck.
B felt it necessary to have full on conversations at 4am this morning and mommy was not amused.  But how do you get upset at this face...... 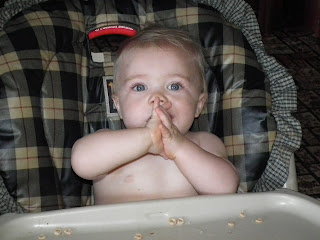 At 430 momma had had enough....hoping Sage was asleep enough that his brothers rambling wouldnt wake him, Thing 2 was relocated again into his own bed.
My alarm did go off 30 minutes later, and then again 5 minutes after that, and another 5 after that and finally at 515am I dragged myself out of bed and grabbed my stuff.  I was NOT going to back out of run my first week...NOT GONNA HAPPEN!!
My iPod, Garmin, shoes and I headed out the door....5 miles, 48:44 later I felt like I could accomplish anything.
Which was a good feeling knowing I had to shower, and throw on my jeans and boots, and go chase some cows around.
4 hours later, that task was done also.
Im exhausted.  And at 32 years old, Im counting down the hours till I can go to bed.....but I feel like after today, I can accomplish just about anything, maybe even 13.1 miles!!
Posted by Mom_2_Pippa at 6:25 PM