﻿
2.  According to this very scientific study Im either royally screwed should the Zombie's comes or Im totally safe because there isnt anything here to take except cows and sand.  But just in case, these are the rules we are living by.....should the zombie come.  Not that they will...but if they do...just sayin'

3. Last weekend Shawn told me to get a TV for our bedroom. I told him I would rather have a laser for my gun. Today, I renewed his membership to Sportsmens Guide without him telling me I needed to because I could get ammo cheaper. Wifey of the Year right here...thankyouverymuch. Really...it doesnt take much to make him happy.

4.  Apparently, I embarrass my 9 year old daughter.  Tragic, isnt it.  She hasnt seen anything yet. 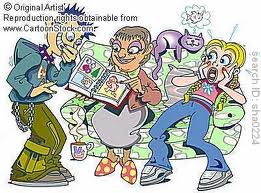 5.  Potty training isnt going terribly well, but it isnt going terribly yet either.  So far he has peed on (as in ON the SIDE) of the potty twice (missing the toilet bowl itself completely), and on the floor next to the potty (after sitting on it for 10 minutes reading his book) and on the floor countless time.  But he is telling me each time he has to go and when he pees on the floor I know because he goes and finds a towel, shakes his head and say "I pee".  Its a step in the right direction, right...I mean...a boy, WILLINGLY cleaning up after himself.  I must be doing something right.