The middle child in our house is a boy.  And he is 2.  Therefore, we are smack in the middle of the that wonderful time in a parents life where consumption of alcoholic beverages becomes the necessary alternative to banging your head against the wall because your 2 year old is awake, screaming, throwing, climbing, hitting, biting conscious. 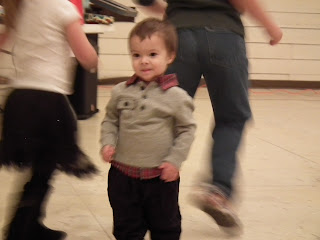 Don't get me wrong, he has his adorable, funny, sweet little boy moments but they are few and far between.  He is 100%, text book, look-up-the- definition-and-see-his-photo terrible 2 year old boy.

He is the middle child by 10.5 months, but his "little" brother is not "little".  Or even "littlier" then he is.....his "little" brother outweighs him by 7lbs.  Doesn't sound like much, except when you are 2 years old and your 15 month old brother has chosen to enact his revenge for your swiping of his favorite sippy cup (that is identical to the one said 2 year old already had) by sitting on you.  23lbs vs 30lbs...there is alot of screaming in my house.

And Sage deserves every bit of retaliation that Brannon throws his way.  He doesn't get much....because Bran is the most uncoordinated child to ever trip stumble crash walk on the face of the Earth.  And I mean, klutzy, but I will save those tales for another blog.

Back to the Middle Child.  So far this week he has given up naps by crawling out of the crib and the pack n' play and attempted to redecorate the Christmas tree (and his brother). Yesterday, he strutted across the gym floor, waving to his adoring fans (aka 7/8th grade girls and his great-grandma).

Today, he wanted to help make holiday cookies (FYI....EPIC FAIL....blog post tomorrow but I'm too annoyed to go there today), but of course, his version of helping.  So he was banished rather quickly to the living room where he felt the need to redecorate the Christmas tree (again) by spinning it in circles to get the lights off.  Thankfully, his sister (who was helping but couldn't dare miss a second of Beetlegeuse on TV was sneaking a peek at the movie and caught him in the act...BUSTED).

After making the cookies, he needed to inspect them.  What follows in the pictorial of what transpired when hubby and I stood back, camera in hand, of course (well, I had wine) to document the shenanigans that can only be produced when a 2 year old walks into the kitchen carrying a chair.