Thats me....Mrs. Grinch.  Thats a had thing to admit to youself (let alone toss it out there into blogger-land) but really, its true.  Christmas is far and away my least favorite holiday/time of the year.  Always has been.  Well, not always.  Pre-1996 it wasnt my favorite, but it wasnt dreaded like it is now.
Yes, I dread Christmas...like I said, Mrs. Grinch.
Long story short is that my Grandma Katie passed away on October 6, 1996. 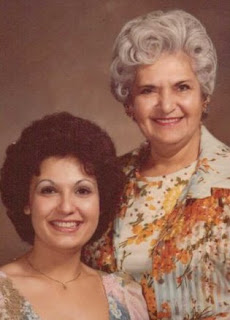 Christmas was always her show.  She LIVED for it.  The cooking, the decorating, the family time.  All of it, and it was all about her.  Really, it was her show and she put on one.  Grandpa would spend a  month decorating the outside of their house way back in the 1970's and 80's so that every inch was covered in lights.  Im talking every. single. possible. open space had a light or a piece of the nativity. Not in the "National Lampoon" style either...classy and beautiful.  I remember being 6 years old and sitting in the living room while Grandma would say her rosary after supper, and watching the cars drive by, just to look at the house.  This is long before it became a competition with neighbors and long before multicolored icicle lights could be set to music. Before it was super cool.
I will always think of Christmas as their holiday.  Grandpa passed away in 1992...on December 23.  Grandma, in October....and my dads father in November.  It was a long few years and sadly, it changed the holidays.
Now that I have my own kiddos, I really try to get into the holiday spirit but thats just not me.  Im not a cookie baker or decorator, Im not crazy with lights outside (however Im forcing my husband to put some up this year.  We dont have neighbors to oogle over them but the kids will love it).  I dont meticulously fuss over our tree...shoot, this year I even contemplated NOT putting a tree up because there is no way Im going to be able to keep the boys out of it.  Nope, not gonna happen. Rest assured, there will be a tree in the Hanna family living room but no ornaments 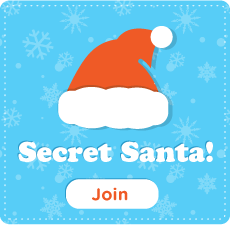 I am doing the Daily Mile Secret Santa to keep some holiday spirit going, and (Just) Trying is for Little Girls Christmas card exchange, that Im really looking foward to.  We have an Elf on the Shelf (Freddy.....talk about P.O.W.E.R!!), Santa will be in town this weekend so the kids will (hopefully) sit on his lap and get their pictures taken as I have not manage to accomplish family pictures.  I have someone lined up to take them, but just wont pick a date.  Me, not her.  What is wrong with me!!!
Piper wont be here this year (which just adds to my grinchiness) so we will be holding off our family Christmas till after she gets back, in January.  2012.
I hate the commercialization of Christmas.  The only time being a stay at home mom bothers me is around Christmas because we dont have the dual income that would allow me more freedom to get my family the stuff they ask for.  My daughter asked for a Kindle for Christmas and Shawn wants a nice pair of $300 snowpants for sledding....enough said.
My parents are in Michigan and my brother and his fiancee are in Colorado.  I just saw my parents but I wont see my brother at all.
The hardest part, is pretending that none of those things bother me when they really do.  Im getting used to it.....its been 15 years and its better then it was before.  So far, it hasnt cost me my marriage, my husband isnt perfect, but he is perfect for me.  Even if he doesnt get it (which he doesnt) he just lets me have my issues and move on.
Can you tell I didnt go for a run today......goodness!!!!  I guess Im just down, and needed to vent.  Why out here, Im not sure.....but something about it feels safe.  Thank for listening/reading.  I prommise, next blog will be running related and/or something amusing about my kids.....they always keep me on my toes and in a good mood (for the most part).
Posted by Mom_2_Pippa at 8:37 PM