Ya know the saying that someone put a "wrench" in your plan/day.  Well, I have a wrench and a hammer.


They are 1 and 2, cute (lucky for them), and today are into more Trouble then I can keep up track of.

And I do mean Trouble with a capital T.

So far today my little tools have locked themselves into a locked kitchen cupboard (still not sure how that one happened) after they emptied the contents.  Have given each other a black eye (hammer) and bloody scratch on cheek (wrench).  Bran aka Hammer cause he breaks or crashes into everything, just handed me a knife he got off the counter in the kitchen, that Sage (wrench) helped him climb onto by opening all the drawers and showing him how to climb.  They have dumped sissy's tooth brush in the toilet (again) after stacking magazines from our "reading material" in front of the bathroom counter and scaling that.

Did I mention last night we moved B out of his crib because while Sage can climb in and out of that, no problem, Mr. Uncoordinated would get half-way up, get stuck and start freaking out.  Then Sage would feel the need to "elp" and "ix" the situation but removing Bran's white-knuckled death grip from the railing of the crib.  I swear, you could feel the house shake then that 33lbs of boy hit the floor and probably hear the screaming in Kansas.

They have busted into my bedroom, pulled out dresser drawers, emptied said drawers so that they could climb into the drawers and wrench then climbed up another level to the top of my dresser and proceeded to throw everything from up there onto his brother, in the drawn below him.  Hammer  then relocated all objects to the floor.  Which was actually a good thing because when he fell out of the drawer, he landed on the stuff so he didn't get hurt.  I'm telling ya....no coordination on that child what.so.ever.

After banishment from my bedroom, I foolishly sent them to play in their own room I had to send them somewhere and with 15 degrees and 50mph winds, outside wasn't an option.  Well it was but I'm still going for runner up Mom of the Year where they cant get the drawers of their dresser open.

They can, apparently, use the diaper stacker as a climbing wall.  Which they did.  It now sits on the porch in multiple pieces.  Lucky for me I think they emptied the contents onto their beds before proceeded with their climb.  Unlucky for me, after the crash, they wanted to play on their beds...which meant everything that had been on their beds was now on the floor dresser EVERYWHERE.

To top it all off, I have a big test in my class tonight that I really need to study for and a house that looks like a bomb went off and two buckles to design.  Piper is playing at halftime of the HS girls basketball games both Thursday and Friday, which is great for the kids, but I cant promise the tools will make it to both games.  I may need a break and their dad, head screw-driver, may have to wrangle them at home so I can go cheer for Stinkerbell in a hot, crowded, loud gym.  But I wont be chasing them so Ill take it!!!

AND, I DVR'd the season premiere of Justified last night and had to stop it 1 2 3 times because of THEM.  Now I cant find the remote control to watch it.  Messing up my room and theirs is one thing, keeping me from a Raylan Givens fix is completely uncalled for. 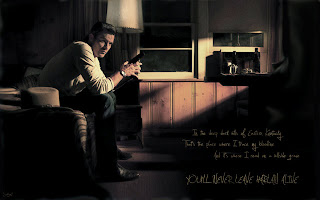